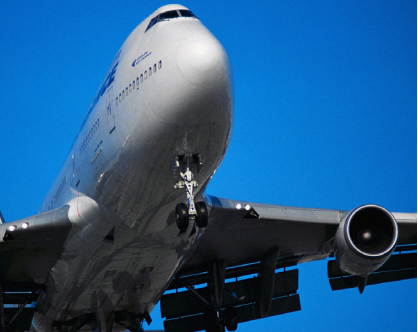 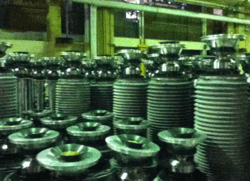 Aircraft wings are the most critical structural component of the entire aircraft and the precision fabrication of aircraft “skins” has become nothing short of engineering artistry. Airplane fuselages and wings for the aviation, space and defense industries are made of 1mm-5mm thick contoured aluminum or aluminum composite and designed to be both incredibly strong and lightweight, a challenging combination that’s been mastered thanks to computer assisted design and automation in manufacturing.

Liné Machines in Quebec, Canada designs, fabricates, and engineers one of the most innovative machines to produce these large aircraft skins: the Flexitool tooling system. Imagine a supersized bed of nails where every “nail” is actually an electromechanical actuator with a SmartMotor™ servo attached to its base. Flexitool can exactly match the unique contoured shape of almost any large metal panel (with support equivalent to a hard tooled fixture) for further processing such as milling, inspection and laser scribing.

Initially, Liné Machines designed a system composed of pneumatic actuators to contour to the geometric dimensions of the metal panels but procurement and machine integration with key suppliers became an issue. The original design of Flexitool based on conventional, inflexible technology meant a separate drive, motor and actuator for each position, as well as a large control cabinet near the machine. Creating Flexitool with 324 different shapes and position configurations with this method meant 324 separate drives, motors and actuators were needed. Instead, Liné Machines decided to create their own turnkey solution.

After thorough research and discussion with customers such as GKN, Boeing and Airbus, Liné Machines redesigned Flexitool using SmartMotor servos coupled to their own custom mechanical actuators. With SmartMotor’s integrated design, the Flexitool tooling system accomplished the same 324 positions with only 160 actuators and SmartMotor servos…a 49% reduction of parts and floor space used with the same or greater capabilities.

“We used the integrated SmartMotor because having separate controllers, drives and motors was limiting our capabilities. Now the connection is much simpler, and it’s easier to increase or decrease the number of tooling structures for each Flexitool ordered,” said Claude Sven Zurbuchen, Lead Product Development Engineer for Liné Machines.

This Flexitool system is 3m wide x 5.6m long but the system can be customized to the customer part dimensions and can range up to 6m wide and 20m - 50m long. Considering the size, modular design and easy installation of the SmartMotor was key. All the components you would find in an external control cabinet are inside the compact SmartMotor, saving valuable factory floor space.

Each SmartMotor has 32Kbs of memory and can be loaded with up to 8,000 preset positions allowing for thousands of preset configurations and giving Flexitool the ability to match almost any panel’s contour. Since airplane panels very often shortrun, made-to-order parts, the flexibility that SmartMotor created also saved the cost of having multiple hard tooled structures. In addition, the final quality of the panel pieces improved compared to a hard tooled fixture by holding the precision contoured shape to prevent warping during the milling and laser scribing processes. Flexible and fast changeover between panels was integral for streamlining the production process to create greater throughput, and the Flexitool with SmartMotor servos performed seamlessly.

The largest advantage of incorporating the SmartMotor in the Flexitool system was Combitronic™ technology. When raising or lowering any panel on the Flexitool tooling system, all of the actuators needed to move in sync vertically from any position to prevent warping. Typically either Ethernet, Profibus, DeviceNet or CANopen were chosen to communicate between motors in this situation. However, none of these networks alone allowed Flexitool to talk to multiple motors simultaneously; it must address each device separately. While this wouldn’t be a problem with two or three motors, Liné Machines had an impressive 160 actuators in just one of its Flexitool systems. Simultaneous addressing with conventional methods (echoing the communication through each individual motor) would have caused delay and the risk of warping the panels and sequential addressing would have added propagation delays.

Combitronic delivered the ultimate combination of group addressing and global addressing, creating the ability to communicate with all 160 SmartMotor servos in a completely synchronized fashion with no delay in execution.

Liné Machines’ Flexitool machine is at the forefront of aviation manufacturing, harnessing the benefits of Animatics’ Combitronic communications through use of integrated SmartMotor technology. Along the way they’ve discovered for themselves the advantage of veering from traditional system design and instead building machines faster, better and…smarter.