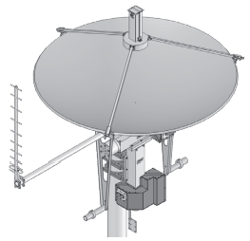 Accuracy is critical to antenna positioning systems. M2 Antenna Systems, Inc. is a leading manufacturer of PID (proportional, integral and derivative algorithm based) style antenna pedestals. Whether for researching planets in space or tracking satellites for government, military or commercial purposes, M2 can usually build their pedestals in one third of the time of larger manufacturers at about a third of the cost while still maintaining the precision performance integral for successful celestial tracking. 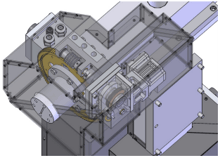 The positioner can support up to a 12-foot antenna reflector, weighing nearly 200lbs., moving at a velocity of 4-6 degrees per second (based on antenna size) in each of its three axes (azimuth, elevation and polarity). The SmartMotor runs through two separate worm gear sets in order to achieve this kind of velocity and accuracy. “With a bigger reflector dish, you have more gain (measure of concentrated power in a particular direction) but a tighter beam width, so you need a more accurate antenna pedestal,” said Wyatt Lyzenga, Sales & Marketing Manager at M2. “We started out using a DC motor and closed loop system and were getting an accuracy of 0.25 degrees in 1 direction. With the SmartMotor we’ve improved the accuracy, bringing it down to 0.02 degrees in all three directions.”

M2 originally looked at other servo motors that may have worked for the application, such as Delta Tau, but the complex software and associated price tag didn’t fit well into M2's cost/performance strategy. Their software consultant recommended the SmartMotor, which he'd been successfully integrating into applications for almost ten years.

“There is a lot of technology to be had with SmartMotor,” Lyzenga said. “One of our government customers is using 6-ft antennas to track their UAVs (unmanned aerial vehicles). As long as the feed assembly is not too far off, with the SmartMotor they are moving at 6-8 degrees/sec over a 240 degree field. With the right type of gear train, you could be moving a 1,500 lb., 20-ft diameter dish up to 30 degrees/sec.” 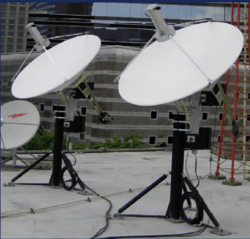 Big plans are in M2's future with the help of the SmartMotor, including a cost-effective means of “auto-tracking.” Auto-tracking is accomplished by writing code into the controller unit specifying a certain object’s trajectory, while a separate antenna module with receiver is set up to judge signal strength of the object in orbit and automatically adjust the equations in the system to correct the slightest position error and therefore receive the strongest signal data.